Did you know that spirulina…
Is suitable for vegan or vegetarians?

Spiroulina PLATENSIS is a suitable solution for vegetarians and generally everyone who avoids the consumption of animal products.

Vegetarian diet and Ω-3 fatty acids
Have you ever heard that you can be deficient in omega 3 fatty acids because you are not eating fish?

At times, studies are being published that refer that vegetarians and vegans are deficient to those substances.

Of course, nothing of this is true!
Recent studies show that the omega 3 fatty acids levels of a vegan is the same of those who consume animal products.

However, those who do not consume fish it is important to consume spirulina.

Spirulina is a small alga that is enriched in fatty acids without containing heavy metals.

What is vitamin B12?
Vitamin B12, known as cyanocobalamin, has various properties in our organism. It increases energy levels, regulates the immune and nervous system and enhances memory and concentration.

We should highlight that vitamin B12 is not produced by plants.

Vitamin B12 sources for vegans are limited. It is usually administered from food enriched in B12 and spirulina.
Did you know that… 3g Spirulina PLATENSIS covers 81,25% of daily needs?

What is iron?
Iron is a metal and is a haemoglobin which is responsible for oxygen transport among the tissues. In addition, it is necessary in the bone marrow for the red blood cell production.

Specifically, it can be found in lentils, red beans, tofu, quinoa, chia, cashews, tahini, spinach and dried apricots as well as figs, grapes and spirulina.

Particularly, with 3g spirulina PLATENSIS you cover the 18,87% of your daily needs.

Vegetarian diet and proteins
Every vegetarian should know the high protein sources apart from meat.

What are proteins?
Proteins are large macromolecules, consisting of the amino acids; carbon, hydrogen, oxygen and nitrogen. They have many functions one of those is energy release.

In addition, breakdown of proteins are amino acids which are smaller chemical unions. There are amino acids that can be synthesised in the organism and there are others that we only receive from food.
Protein sources are soya, lentils, black beans, quinoa, tofu, peanut butter, almonds, oatmeal and chia seeds.

It is of high importance, though, the quality of protein we receive. 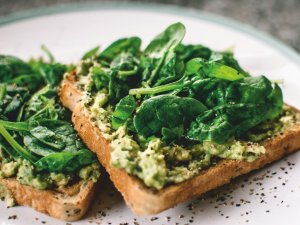